Yesterday I finished the painting I told you about in my previous blog entry.  I initially thought it would be a piece of cake; I did a smaller version earlier (see my July 5 blog) so what could possibly go wrong? I should have known better. Every time I think stuff like that, I get into trouble.


It turned out the hardest part was the sky. It's a peculiar sky, with a diagonal line that separates a lighter and a darker part. I didn't make that up: I saw a similar sky this spring. The line is caused by a cloud that blocks the sun. The funny thing is that it coincides exactly with a contrail.

The problem was how to balance the two parts. In the early stages of the painting the line was too hard, so I kept softening it, till it almost disappeared and I had to go the other way. And then again I had to soften it and so on and so forth... It's a big painting, so it took me quite a few days to get it right. I'm okay with it now. What do you think? 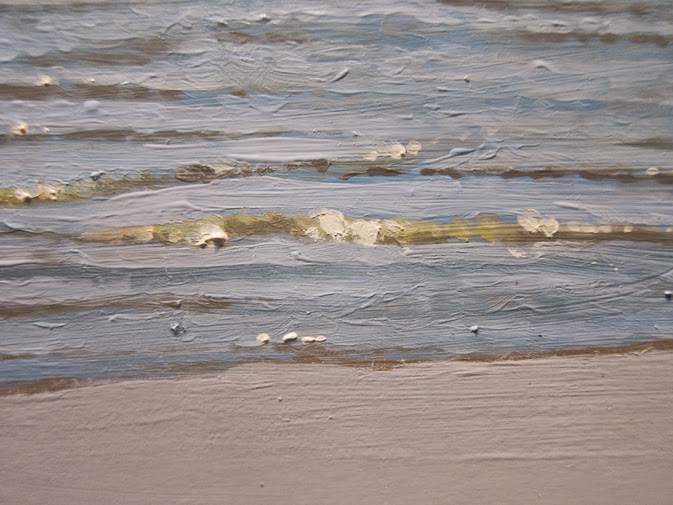 Painting the water is a lot of fun. Especially the little dots of foam. Titanium white, always mixed with just a hint of color. In this case Naples Yellow. I'm using Bohemian Green with a little Burnt Sienna in the shadow parts of the waves. The Dutch beaches are very sandy and that has an effect on the color of the water. It gets a bit muddled and sometimes it is downright brown or even green. Every now and then I envie those of you who live on the coast of the Mediterrenean or the Pacific with it's blue-green water, but I do love the endles shades of grey-ish blue that are so typical of the North Sea. They're the colors I grew up with.

Maybe you remember the triptych I made a few months ago. The centerpiece is a picture of my grandson and his dad walking towards the sea. I wrote about it in my blog entry of August first. It's a small painting and I have been imagining for some time what it would look like on a really large panel, 120 x 160 cm or something like that. A few days ago I decided to stop imagining and start painting.


Starting a painting often means thinking about it, making a plan. In this case I wondered should I do the landscape first and paint the figures on top of it, or integrate them in the underpainting. I decided to the latter. They're such an important part of the painting, they should be involved in the equasion right from the start. The downside of course is that you can't paint the landscape in a single stroke as it were, but you have to leave out the figures in the first stage. It's more work, but hey, I love painting, so who cares.

Anyway, here's a picture of that first stage. In my next blog entry I hope to show you what happened next.