When I was an arts student (sometime half way the previous century) I learned that it was only during the nineteen hundreds that the white background became common. Before that it was either the natural color of the canvas or a color the artist had applied. It seems the Venetians (Tintoretto and others) used a bright red ground for their work. This is of course all second hand knowledge and in the real world I have little experience with colored grounds. I used it a few times in the past , mainly for dune landscapes when I applied a Burnt Sienna ground. Gave the greens of the dunes on top of it a nice glow.

Anyway, for some reason I thought I'd try a grey background for a change. After applying it I got my cloth and 'drew' the clouds in the wet grey paint. At this point the painting looked like this: 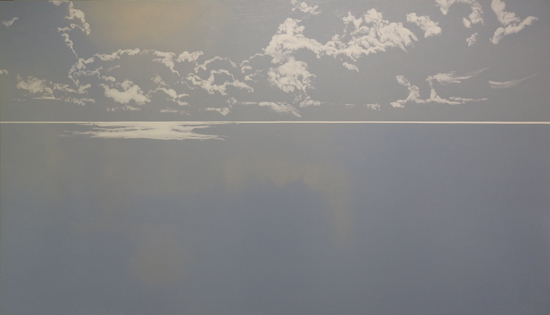 
I really liked the experience. The grey ground immediately unifies everything you do on top of it. The down side (like fellow-painter Dave Smith pointed out) is that your colors may not turn out as bright as with a white background. I wouldn't use it for a sunny beach scene. It's probably best suited for paintings with a soft atmosphere, like this one.  I will certainly use it more often!
Posted by Janhendrik Dolsma at 1:06 AM 16 comments:

Last week I finished this large piece. It started with the picture on the bottom. I really liked this big, long cloud and how it moved from the left- to the right side in one go. Problem was the cloud had no point where it moved to. So I decided to flip the image and paint a sunset as the center of attention. Easier said than done...

I figured I was going to run into some serious problems, so I decided to make an oil sketch on paper before starting to work on the real thing. Some of the issues I had to resolve:
- If I flipped the image, the sunset would light up the other side of the cloud, so I had to figure out how and where the light would fall.
- Had to paint a sunset that would fit in with the rest of the clouds and paint a matching reflection. 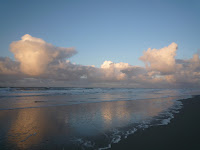 - Didn't like the diagonal line of the land wash in the picture, wanted something more interesting.
- Same for the ocean.

After painting the sketch I felt confident enough to begin the large painting. As you can see there are still quite a few differences between the sketch and the final piece. Which goes to show that you can't solve everything in a sketch. Still, I enjoy making them and they sure help in preparing for the final painting.