'The level at which you're trying to solve a problem is often not the level that causes the problem.'

I don't remember who said this. I picked it up sometime during the nineties, when I was still teaching art classes. It often helped me to look at a problem from a different angle and this goes for painting problems as well. Here's a painting I recently finished. 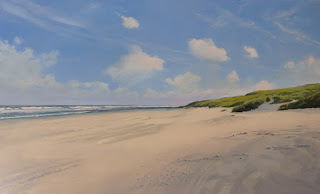 This is what it looked like in an earlier stage. Lots of fluffy clouds. I had been struggling with them for some time. Adding detail, changing color, what have you. Nothing worked. For some reason the painting lacked focus, it was in fact unclear to me what I wanted it to be about. When I replaced the clouds with a blue sky I suddenly knew: it's about the sunlit area behind the dune (that you can't even see) and not about the clouds. Once I saw that, it was a piece of cake: I brought more color and light to the sky behind the dune and within half an hour I decided the thing was finished...

Of course I didn't look at my painting and thought: 'The level at which I'm trying to solve this problem is not the level that causes the problem.' I solved it while painting. But still, what happened is that I approached it from another level. Maybe I should remember it the next time I get stuck...
Posted by Janhendrik Dolsma at 12:18 AM 2 comments:

I usually post a new entry every two weeks, but this time it has been a little longer. I was occupied elsewhere. On Madeira, to be exact. Madeira is a small volcanic island, a speck in the Atlantic. It's the place where Sisi went to cure her tuberculosis. There's a small statue of her where people still put flowers.

Madeira is stunningly beautiful. Flowers everywhere, fantastic scenery and a deep blue ocean. I spent quite a few hours at the waterfront, looking at the Atlantic. I'm used to the North Sea, which is, well, a bit muddy. The color of the water is often brown- or greenish because of the sandy bottom. The Atlantic on the other side is very clear. We saw dolphins swimming underwater! When you see a fish swimming underwater in the North Sea you've probably been drinking.

The painting below was inspired by yet another sea, The Wadden Sea. It's a tidal landscape that partly falls dry at low tide. On the map you can find it between the Wadden Sea islands and the Dutch mainland. It stretches all the way to Denmark. Now here is a sea that is defined by the presence of sand. A lot of sand. When high tide comes in it deposits sand from the North Sea on the banks, that fall dry at low tide. If you're lucky you can spot seals on the banks, chilling in the sun.

A lot of my work is inspired by this particular stretch of water, always changing and moving with the tide. Even the islands move slowly to the east. Now I don't sea Madeira doing that...